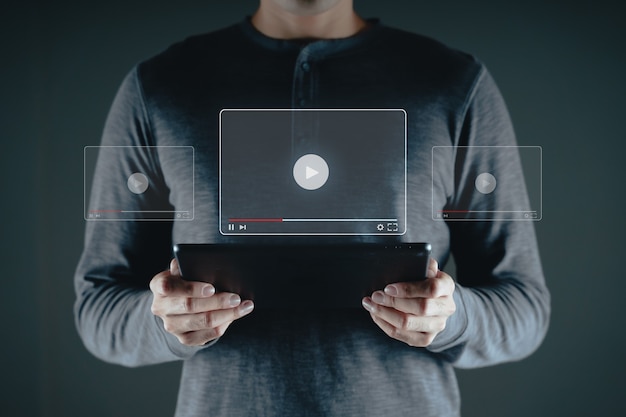 Online streaming is more accessible than ever thanks to a variety of physical and digital tools. However, there's a lot of jargon in the streaming industry that can make it intimidating for creators who just want to get started. That's why we've compiled a list of over 50 streaming terms to provide some clarity for creators who are ready to start streaming.

Analytics: Metrics that provide information on the quantitative performance of a video or channel

Aspect ratio: The ratio between the width and the height of videos in pixels; the most popular aspect ratios are 16:9 and 9:16, but some video players and devices support 1:1 or 4:3, as well

Bandwidth: The capacity of data that can be transferred

Bitrate: A measure of the amount of data that can be transferred at one time

Buffering: The result of a video progressing faster than it downloaded; typically caused by insignificant internet speeds relative to the file size

Capture card: An input device that transports video from the capture device to the streaming platform, encoder, or streaming software

Capture device: Tools for capturing elements of a stream, including various types of cameras and microphones

CDN: Short for “content delivery network”; a collection of servers that delivers online video from the streamer to video players around the world

Chroma key: The technology that makes it possible to change the background of a video with a green screen or blue screen

Closed caption: Text that is placed on videos to match the words and sounds that are playing in the clip; these are used to improve the accessibility of videos and make it easier for viewers to follow along with minimal or no audio

CTA: Short for “call to action”; a marketing technique that includes strategic messaging to urge viewers to take a specific action

Download speed: A measure of internet speed that assesses how much data can be downloaded over a specific period of time; typically measured in megabits per second (Mbps)

Encoding: The process of converting video from the RAW file captured by the camera to streamable digital files; can be carried out with a hardware or software encoder; some popular encoders include Mux, OBS, Teradek, vMix, and TriCaster

Firewall: A security mechanism that blocks the digital entrance or access of unauthorized users

High-definition streaming: Commonly referred to as “HD streaming”; streaming with a resolution of 720p to 1080p; videos with resolutions higher than 1080p could also be considered “HD” but they may be referred to by other names, such as Ultra-HD or 4K

HLS: Short for “HTTPS Live Streaming”; a streaming protocol that was designed by Apple to deliver content to the HTML5 video player; can be used for both delivery and ingest

Latency: The time between a live stream is captured and the time it reaches the video players on viewers’ devices

Lighting equipment: Tools that are used to improve the quality of video by providing adequate lighting; range from simple ring lights to studio flash kits

Linear streaming: Continuous streaming with either live or pre-recorded content over an extended period of time structured similarly to traditional television stations

Live shopping: Selling in real-time via live streams; uses strategic CTAs to urge viewers to buy a product showcased in a live stream

Live streaming: Broadcasting video content as it is captured in real-time over the internet

Low-latency streaming: Streaming with a latency under 20-30 seconds

Lower third: Graphic overlays that are placed along the bottom portion of the video player

OTT: Short of “over-the-top” streaming; a streaming delivery method that is powered by the internet rather than older streaming methods, such as cable or satellite

Overlays: Contextual graphics and information that are added to video content; popular overlays on Maestro include graphics, tweets, Shopify links, and polls

Paywall: A screen that prevents users from viewing the video content until they’ve paid or provided the required credentials; at Maestro, paywalls are a type of “Gate”

Picture-in-picture: Often referred to as “PiP”; a streaming technique that displays a video within the frame of another video

Playlists: Curated collections of media that are typically used for organization; could include video, songs, podcasts, and other video and audio files

RTMP: Short for “Real-Time Messaging Protocol”; a streaming protocol that was used to deliver video to the Adobe Flash player; it is now used to ingest video content to the streaming platform

Standard-Definition streaming: Commonly referred to as “SD streaming”; streaming with a resolution of around 576p; used to be the standard video resolution

Streaming protocol: Technology that transports video signals and aids in communication between different components of the streaming workflow

Streaming software: Any digital applications and programs that are used to support the streaming process, whether it be for production, encoding, mixing, multistreaming, or any other relevant function

Streaming workflow: Your streaming setup, which could include a streaming platform, capture devices, encoders, streaming production software, and a variety of other tools

Transcoding: The process of creating multiple renditions (or versions) of a video file in different bitrates for adaptive streaming

Upload speed: A measure of internet speed that assesses how much data can be uploaded over a specific period of time; typically measured in megabits per second (Mbps)

Video player: The interactive technology that allows viewers to access video content on their internet-enabled devices; HTML5 is currently the only widely supported video player technology

VOD: Short for “video on demand”; a type of online video streaming that allows viewers to access video for on-demand viewing

White-label streaming: Streaming with no branding from the video streaming platform; only includes your own branding